Instant reactions to partial information is very common and cause much grief and hostility.  When we do not know the whole story the reactions and emotion are often wrong and dangerous.

It is so easy to jump to false conclusions, then close the mind to any correction, for fear of having "to back down."

Uncorrected information can lead to divorce, broken relationships and many undesirable outcomes.

Jesus with His disciples...

The gathering of the whole assembly at Shiloh preparing to go to war against their brother tribes... 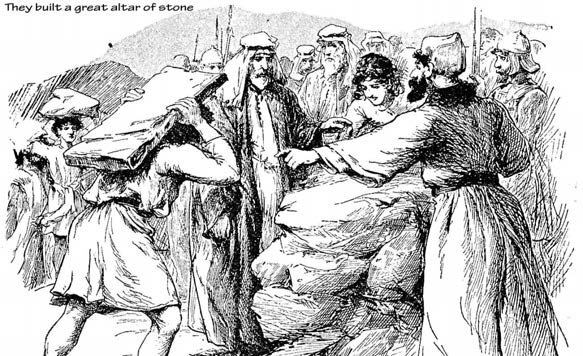 "Then Joshua called together the tribes of Reuben, Gad, and the half-tribe of Manasseh. 2 He told them, “You have done as Moses, the servant of the Lord, commanded you, and you have obeyed every order I have given you. 3 During all this time you have not deserted the other tribes. You have been careful to obey the commands of the Lord your God right up to the present day. 4 And now the Lord your God has given the other tribes rest, as he promised them. So go back home to the land that Moses, the servant of the Lord, gave you as your possession on the east side of the Jordan River. 5 But be very careful to obey all the commands and the instructions that Moses gave to you. Love the Lord your God, walk in all his ways, obey his commands, hold firmly to him, and serve him with all your heart and all your soul.” 6 So Joshua blessed them and sent them away, and they went home.

7 Moses had given the land of Bashan, east of the Jordan River, to the half-tribe of Manasseh. (The other half of the tribe was given land west of the Jordan.) As Joshua sent them away and blessed them, 8 he said to them, “Go back to your homes with the great wealth you have taken from your enemies—the vast herds of livestock, the silver, gold, bronze, and iron, and the large supply of clothing. Share the plunder with your relatives.”

9 So the men of Reuben, Gad, and the half-tribe of Manasseh left the rest of Israel at Shiloh in the land of Canaan. They started the journey back to their own land of Gilead, the territory that belonged to them according to the Lord’s command through Moses.

The Eastern Tribes Build an Altar

10 But while they were still in Canaan, and when they came to a place called Geliloth near the Jordan River, the men of Reuben, Gad, and the half-tribe of Manasseh stopped to build a large and imposing altar.

11 The rest of Israel heard that the people of Reuben, Gad, and the half-tribe of Manasseh had built an altar at Geliloth at the edge of the land of Canaan, on the west side of the Jordan River. 12 So the whole community of Israel gathered at Shiloh and prepared to go to war against them. 13 First, however, they sent a delegation led by Phinehas son of Eleazar, the priest, to talk with the tribes of Reuben, Gad, and the half-tribe of Manasseh. 14 In this delegation were ten leaders of Israel, one from each of the ten tribes, and each the head of his family within the clans of Israel.

15 When they arrived in the land of Gilead, they said to the tribes of Reuben, Gad, and the half-tribe of Manasseh, 16 “The whole community of the Lord demands to know why you are betraying the God of Israel. How could you turn away from the Lord and build an altar for yourselves in rebellion against him? 17 Was our sin at Peor not enough? To this day we are not fully cleansed of it, even after the plague that struck the entire community of the Lord. 18 And yet today you are turning away from following the Lord. If you rebel against the Lord today, he will be angry with all of us tomorrow.

19 “If you need the altar because the land you possess is defiled, then join us in the Lord’s land, where the Tabernacle of the Lord is situated, and share our land with us. But do not rebel against the Lord or against us by building an altar other than the one true altar of the Lord our God. 20 Didn’t divine anger fall on the entire community of Israel when Achan, a member of the clan of Zerah, sinned by stealing the things set apart for the Lord? He was not the only one who died because of his sin.”

21 Then the people of Reuben, Gad, and the half-tribe of Manasseh answered the heads of the clans of Israel: 22 “The Lord, the Mighty One, is God! The Lord, the Mighty One, is God! He knows the truth, and may Israel know it, too! We have not built the altar in treacherous rebellion against the Lord. If we have done so, do not spare our lives this day. 23 If we have built an altar for ourselves to turn away from the Lord or to offer burnt offerings or grain offerings or peace offerings, may the Lord himself punish us.

24 “The truth is, we have built this altar because we fear that in the future your descendants will say to ours, ‘What right do you have to worship the Lord, the God of Israel? 25 The Lord has placed the Jordan River as a barrier between our people and you people of Reuben and Gad. You have no claim to the Lord.’ So your descendants may prevent our descendants from worshiping the Lord.

28 “If they say this, our descendants can reply, ‘Look at this copy of the Lord’s altar that our ancestors made. It is not for burnt offerings or sacrifices; it is a reminder of the relationship both of us have with the Lord.’ 29 Far be it from us to rebel against the Lord or turn away from him by building our own altar for burnt offerings, grain offerings, or sacrifices. Only the altar of the Lord our God that stands in front of the Tabernacle may be used for that purpose.”

30 When Phinehas the priest and the leaders of the community—the heads of the clans of Israel—heard this from the tribes of Reuben, Gad, and the half-tribe of Manasseh, they were satisfied. 31 Phinehas son of Eleazar, the priest, replied to them, “Today we know the Lord is among us because you have not committed this treachery against the Lord as we thought. Instead, you have rescued Israel from being destroyed by the hand of the Lord.”

34 The people of Reuben and Gad named the altar “Witness,” for they said, “It is a witness between us and them that the Lord is our God, too.”

In the 22nd chapter of Joshua, the campaign to conquer the Promised Land has been completed.  It is worth the time to read the whole chapter...

So what do they do when they first set foot in their newly-blessed territory? They made an altar...

It was exactly what they had seen Joshua do when they first entered the Promised Land. It’s the same kind of thing that happened right after the miraculous crossing of the Jordan river (Joshua 4.9) and when the Covenant was renewed on Mount Ebal, following the victories over Jericho and Ai (Joshua 8.30) — not to mention all the other piles of rocks that were intended to serve as reminders to the people of Israel. Rock altars were the known and common tradition.

However, for whatever reason — perhaps by seeds of distrust, “sibling rivalry,” or just some other piece of misinformation that got out of control — the other 9½ tribes of Israel automatically assumed that they were up to no good: that they were abandoning the LORD and resorting to idol worship. As soon as they observed the altar being built, they prepare for war!  But they were wrong!

The one group were doing everything they could think of to preserve their relationship with the LORD and make sure they wouldn’t just drift away into idolatry.

Likewise, the other group were just doing everything in their power to preserve the worship of the LORD in Israel and make sure that their kinsmen wouldn’t just drift away into idolatry.

Fortunately, before the war started they wisely tried to find out what was going on.

Fortunately, they were able to listen well to each other's concerns and respond with important reassurances.

In actual fact - they weren’t turning their backs on the LORD at all.

In truth, their motives were exactly the opposite of what the other tribes had wrongly assumed.

How did they solve this misunderstanding?