The Parable of the
Unjust Steward 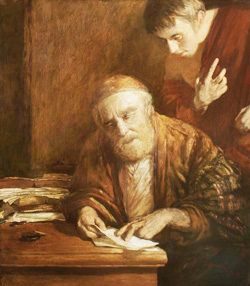 The Parable of the Unjust Steward:

Jesus told this story to his disciples: “There was a certain rich man who had a manager handling his affairs. One day a report came that the manager was wasting his employer’s money.

2 So the employer called him in and said, ‘What’s this I hear about you? Get your report in order, because you are going to be fired.’

3 “The manager thought to himself, ‘Now what? My boss has fired me. I don’t have the strength to dig ditches, and I’m too proud to beg.

4 Ah, I know how to ensure that I’ll have plenty of friends who will give me a home when I am fired.’

5 “So he invited each person who owed money to his employer to come and discuss the situation. He asked the first one, ‘How much do you owe him?’ 6 The man replied, ‘I owe him 800 gallons of olive oil.’ So the manager told him, ‘Take the bill and quickly change it to 400 gallons.

9 Here’s the lesson: Use your worldly resources to benefit others and make friends. Then, when your earthly possessions are gone, they will welcome you to an eternal home."

The Unjust Steward may just have something to show us... 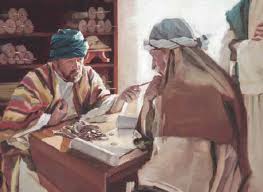 This parable serves to teach us that we may not understand details of the word-picture. Just know the parable "word-picture" well. The Holy Spirit will bring the correct application to us at exactly the right time...

This parable is exciting on many levels -

The Rich man was -

There is indication that the steward, as the manager - made the agreements on behalf of the owner...

A lot of suppositions here...

Why did the owner, the rich man,
describe the manager as "shrewd?"

Sure made a rich man happy - and he praised the ingenuity and foresight shown in a very difficult set of circumstances...

The key here may be an unusual ability to solve insurmountable problems - that GOD can provide unique solutions for those who are willing to trust him - even when in a very difficult struggle - and against all odds - like the parting of the Red Sea at the most pivotal moment, and the enveloping tent protection of the Holy Spirit when tossed into the fiery furnace, or the lion's den...

Remember, GOD works with "imperfect" people - that counts us in, not out!