The Parable of the
Two Debtors 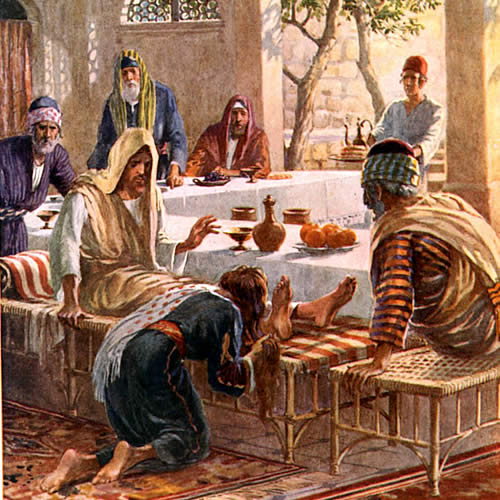 The Parable of the Two Debtors:

"And Jesus, replying, said to him, Simon, I have something to say to you. And he answered, Teacher, say it.

41 A certain lender of money [at interest] had two debtors: one owed him five hundred denarii, and the other fifty.

42 When they had no means of paying, he freely forgave them both. Now which of them will love him more?

43 Simon answered, The one, I take it, for whom he forgave and cancelled more. And Jesus said to him, You have decided correctly.

44 Then turning toward the woman, He said to Simon, Do you see this woman? When I came into your house, you gave Me no water for My feet, but she has wet My feet with her tears and wiped them with her hair.

45 You gave Me no kiss, but she from the moment I came in has not ceased [intermittently] to kiss My feet tenderly and caressingly.

46 You did not anoint My head with [cheap, ordinary] oil, but she has anointed My feet with [costly, rare] perfume.

47 Therefore I tell you, her sins, many [as they are], are forgiven her—because she has loved much. But he who is forgiven little loves little. 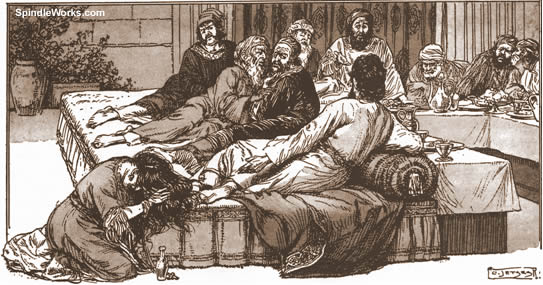 The Two Debtors - Is Forgiveness on Display

Our personal reaction to the Two Debtors parable will very telling...

I am deeply moved by the Two Debtors parable. The more I meditate on it, the more I see myself just as the "immoral woman" - and I have a weeping that comes into my spirit as I realize I am as guilty as her.

Casual observers of the two debtors parable have little idea of what is going on here - ALL they see is our past sin, which is correct - which we all see as well - but forgiveness washes that past away. That's the difference. The penalty of sin has been removed through the shed blood sacrifice of Jesus Christ.

The Parable of the Two Debtors:

36 "One of the Pharisees asked Jesus to have dinner with him, so Jesus went to his home and sat down to eat.

37 When a certain immoral woman from that city heard he was eating there, she brought a beautiful alabaster jar filled with expensive perfume.

38 Then she knelt behind him at his feet, weeping. Her tears fell on his feet, and she wiped them off with her hair. Then she kept kissing his feet and putting perfume on them.

39 When the Pharisee who had invited him saw this, he said to himself, “If this man were a prophet, he would know what kind of woman is touching him. She’s a sinner!”

40 Then Jesus answered his thoughts. “Simon,” he said to the Pharisee, “I have something to say to you.” 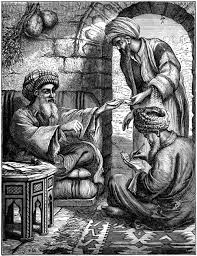 41 Then Jesus told him this story: “A man loaned money to two people—500 pieces of silver to one and 50 pieces to the other.

42 But neither of them could repay him, so he kindly forgave them both, canceling their debts. Who do you suppose loved him more after that?”

43 Simon answered, “I suppose the one for whom he canceled the larger debt.”

44 Then he turned to the woman and said to Simon, “Look at this woman kneeling here. When I entered your home, you didn’t offer me water to wash the dust from my feet, but she has washed them with her tears and wiped them with her hair.

45 You didn’t greet me with a kiss, but from the time I first came in, she has not stopped kissing my feet.

46 You neglected the courtesy of olive oil to my head, but she has anointed my feet with rare perfume.

47 “I tell you, her sins—and they are many—have been forgiven, so she has shown me much love. But a person who is forgiven little shows only little love.”

48 Then Jesus said to the woman, “Your sins are forgiven.”

49 The men at the table said among themselves, “Who is this man, that he goes around forgiving sins?” 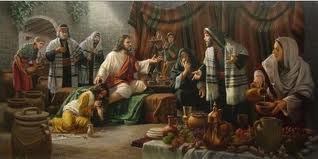 Simon, you did not give me a "kiss on the cheek" - a common sign of hospitality - but this woman kissed "my feet" - a token of total humility

Simon, you gave me no water to wash the dust off my feet - neglecting a customary act of hospitality - but she gave me "the water of her weeping, and tears"

Simon, usually a guest has cheap oil at their disposal while in your house - but she brought a very expensive perfume - and anointed my feet with it...

Mary was in your house, Simon, and she did the honors to your guests... and you thought I did not know how to recognize character - and who has it!

Simon, in his own eyes was too good to offer customary hospitality. He lacked any consciousness of sin... that's why the parable said that she has been forgiven much and he little.

They all criticized Mary. Her sin could not be condoned. Yet - she found forgiveness. She demonstrated the ongoing relationship between forgiveness and "love" that comes out of forgiveness.

Simon did not lack sin. But had no interest to explore any way out of his own self importance, self-righteousness and pride. He did not allow any connection with GOD's power of forgiveness and mercy. He wasn't interested. She was.