Nothing is more detestable in GOD's sight than pride on the part of creatures who have absolutely nothing to be proud of.

Pride is caused by - 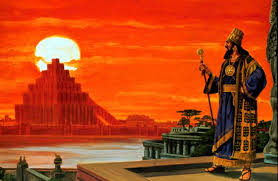 As he looked out across the city, he said, ‘Look at this great city of Babylon! By my own mighty power, I have built this beautiful city as my royal residence to display my majestic splendor.’

19 “Upon hearing this, Daniel (also known as Belteshazzar) was overcome for a time, frightened by the meaning of the dream. Then the king said to him, ‘Belteshazzar, don’t be alarmed by the dream and what it means.’“Belteshazzar replied, ‘I wish the events foreshadowed in this dream would happen to your enemies, my lord, and not to you! 20 The tree you saw was growing very tall and strong, reaching high into the heavens for all the world to see. 21 It had fresh green leaves and was loaded with fruit for all to eat. Wild animals lived in its shade, and birds nested in its branches. 22 That tree, Your Majesty, is you. For you have grown strong and great; your greatness reaches up to heaven, and your rule to the ends of the earth.

23 “‘Then you saw a messenger, a holy one, coming down from heaven and saying, “Cut down the tree and destroy it. But leave the stump and the roots in the ground, bound with a band of iron and bronze and surrounded by tender grass. Let him be drenched with the dew of heaven. Let him live with the animals of the field for seven periods of time.”

24 “‘This is what the dream means, Your Majesty, and what the Most High has declared will happen to my lord the king. 25 You will be driven from human society, and you will live in the fields with the wild animals. You will eat grass like a cow, and you will be drenched with the dew of heaven. Seven periods of time will pass while you live this way, until you learn that the Most High rules over the kingdoms of the world and gives them to anyone he chooses. 26 But the stump and roots of the tree were left in the ground. This means that you will receive your kingdom back again when you have learned that heaven rules.

27 “‘King Nebuchadnezzar, please accept my advice. Stop sinning and do what is right. Break from your wicked past and be merciful to the poor. Perhaps then you will continue to prosper.’

28 “But all these things did happen to King Nebuchadnezzar. 29 Twelve months later he was taking a walk on the flat roof of the royal palace in Babylon. 30 As he looked out across the city, he said, ‘Look at this great city of Babylon! By my own mighty power, I have built this beautiful city as my royal residence to display my majestic splendor.’

31 “While these words were still in his mouth, a voice called down from heaven, ‘O King Nebuchadnezzar, this message is for you! You are no longer ruler of this kingdom. 32 You will be driven from human society. You will live in the fields with the wild animals, and you will eat grass like a cow. Seven periods of time will pass while you live this way, until you learn that the Most High rules over the kingdoms of the world and gives them to anyone he chooses.’

33 “That same hour the judgment was fulfilled, and Nebuchadnezzar was driven from human society. He ate grass like a cow, and he was drenched with the dew of heaven. He lived this way until his hair was as long as eagles’ feathers and his nails were like birds’ claws.

34 “After this time had passed, I, Nebuchadnezzar, looked up to heaven. My sanity returned, and I praised and worshiped the Most High and honored the one who lives forever. His rule is everlasting, and his kingdom is eternal.

36 “When my sanity returned to me, so did my honor and glory and kingdom. My advisers and nobles sought me out, and I was restored as head of my kingdom, with even greater honor than before.

37 “Now I, Nebuchadnezzar, praise and glorify and honor the King of heaven. All his acts are just and true, and he is able to humble the proud.” 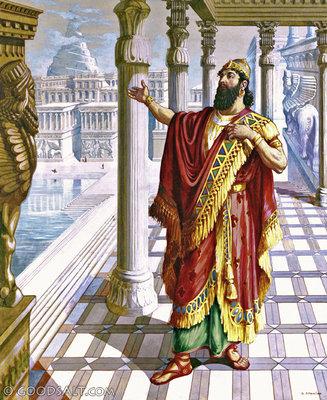 Pride is a "built-in", inherent problem with fallen mankind...

When pride strips us of honor...then comes "shame".

Genesis 3.7 " At that moment their eyes were opened, and they suddenly felt shame at their nakedness. So they sewed fig leaves together to cover themselves."

Before they sinned against GOD...

Genesis 2.25 "Now the man and his wife were both naked, but they felt no shame."

Examples we must learn from...

The bottom line is...

Isaiah 2.17 "Human pride will be humbled, and human arrogance will be brought down. Only the Lord will be exalted on that day of judgment"

Pride is giving ourselves the honor due only to GOD

Humility is knowing what GOD has done for us, that we could not, nor cannot do!