The Parable of the
Talents 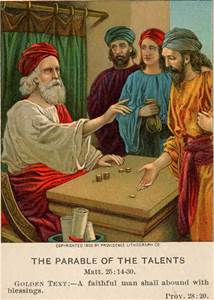 The Parable of the Talents:

“Again, the Kingdom of Heaven can be illustrated by the story of a man going on a long trip. He called together his servants and entrusted his money to them while he was gone. 15 He gave five bags of silver to one, two bags of silver to another, and one bag of silver to the last—dividing it in proportion to their abilities. He then left on his trip.

19 “After a long time their master returned from his trip and called them to give an account of how they had used his money. 20 The servant to whom he had entrusted the five bags of silver came forward with five more and said, ‘Master, you gave me five bags of silver to invest, and I have earned five more.’

21 “The master was full of praise. ‘Well done, my good and faithful servant. You have been faithful in handling this small amount, so now I will give you many more responsibilities. Let’s celebrate together!’

23 “The master said, ‘Well done, my good and faithful servant. You have been faithful in handling this small amount, so now I will give you many more responsibilities. Let’s celebrate together!’

26 “But the master replied, ‘You wicked and lazy servant! If you knew I harvested crops I didn’t plant and gathered crops I didn’t cultivate, 27 why didn’t you deposit my money in the bank? At least I could have gotten some interest on it.’

28 “Then he ordered, ‘Take the money from this servant, and give it to the one with the ten bags of silver. 29 To those who use well what they are given, even more will be given, and they will have an abundance. But from those who do nothing, even what little they have will be taken away. 30 Now throw this useless servant into outer darkness, where there will be weeping and gnashing of teeth.’

What GOD gives us is "required" to be put into use...

Of the three servants, two were prepared to invest their talents. One was not.

The one-talent servant was not prepared to take the risk and trade his gifting.

There are millions who have "buried" their GOD-given opportunity for increase and fruitfulness and what abilities they have received to invest lie dormant. Nothing can grow until it is put out there into the marketplace...

Songs are not sung, prisoners not visited, children not fed, some are naked -not clothed when they could be, hungry - but not fed...all because of fear of failure!

Why do people bury their contribution, their gift, their unique ability? They become afraid of :

Burying the gift, ability, opportunity is failure. Begin today - look for your assignment, and do not allow anybody, or anything stop you. The only one who truly has the power to stop you - is yourself, nobody else!

Use what GOD has given you - get it out there, so it can multiply. And one more thing - God does NOT expect a one-talent to multiply to a three, or two increase, or fruitfulness. Just doubling it got the same response...

Some thoughts on talents or gifts...and harvest