One of the worst punishments GOD can lay upon us individually, is to be filled with our own ways

" The backslider in heart shall be filled with his own ways, and a good man shall be satisfied [or saved] from himself."

Note that the verse says...The backslider in heart...

Peter denied the LORD three times. Where was the break-down? It was in his heart. Peter struggled in his thought-life.

The Prodigal Son is an example...

We are our own worst enemy!

A man may be overtaken in a fault...

"Dear brothers, if a Christian is overcome by some sin, you who are godly should gently and humbly help him back onto the right path, remembering that next time it might be one of you who is in the wrong."

It may be a sin of ignorance...

"“Give the following instructions to the people of Israel. This is how you are to deal with those who sin unintentionally by doing anything that violates one of the Lord’s commands."

"And he is able to deal gently with ignorant and wayward people because he himself is subject to the same weaknesses."

Or when hating to sin, resisting the sin, yet still having problems...

"I don’t really understand myself, for I want to do what is right, but I don’t do it. Instead, I do what I hate. 16 But if I know that what I am doing is wrong, this shows that I agree that the law is good. 17 So I am not the one doing wrong; it is sin living in me that does it.

21 I have discovered this principle of life—that when I want to do what is right, I inevitably do what is wrong. 22 I love God’s law with all my heart. 23 But there is another power within me that is at war with my mind. This power makes me a slave to the sin that is still within me. 24 Oh, what a miserable person I am! Who will free me from this life that is dominated by sin and death?"

It is caused by allowing world-opinion and influence to control our thinking...

Hosea 7.8 "“The people of Israel mingle with godless foreigners, making themselves as worthless as a half-baked cake!

- mingling and conforming - a dangerous combination which results in verse 9

"Worshiping foreign gods has sapped their strength, but they don’t even know it."

A man needs no other rod from GOD than to become a slave to his own ways and appetites...

Man becomes a "fountain" of his own misery!

Note that the "good man shall be satisfied from himself..." and that is what we all strive for -

"Not that I was ever in need, for I have learned how to be content with whatever I have.

12 I know how to live on almost nothing or with everything. I have learned the secret of living in every situation, whether it is with a full stomach or empty, with plenty or little.

13 For I can do everything through Christ, who gives me strength."

The good man has a different "fountain"...

The backslider is the "fountain of his own misery" - but the good man has a fountain from a different source...

" But those who drink the water I give will never be thirsty again. It becomes a fresh, bubbling spring within them, giving them eternal life."

The Holy Spirit of GOD dwelling in the "spiritual heart", filling it with His goodness and fullness. 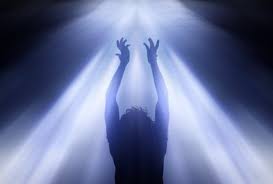 Which one do you want?

Give someone you know a call today and invite them to this Daily Bible Study. You have no idea of how many people are waiting for this kind of information...

E-mail a friend. It would be great if you did that today! Thanks.