The Parable of the
Lost Sheep 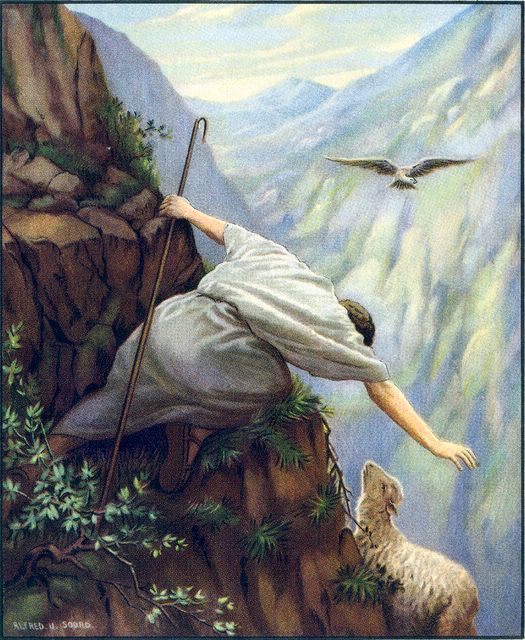 Tax collectors and other notorious sinners often came to listen to Jesus teach.

2 This made the Pharisees and teachers of religious law complain that he was associating with such sinful people—even eating with them!

3 So Jesus told them this story: The Parable of the Lost Sheep...

4 “If a man has a hundred sheep and one of them gets lost, what will he do? Won’t he leave the ninety-nine others in the wilderness and go to search for the one that is lost until he finds it?

5 And when he has found it, he will joyfully carry it home on his shoulders.

6 When he arrives, he will call together his friends and neighbors, saying, ‘Rejoice with me because I have found my lost sheep.’

7 In the same way, there is more joy in heaven over one lost sinner who repents and returns to God than over ninety-nine others who are righteous and haven’t strayed away!

The Parable of the Lost Sheep...

Jesus is the Good Shepherd...

The Good Shepherd and His Sheep

10 “I tell you the truth, anyone who sneaks over the wall of a sheepfold, rather than going through the gate, must surely be a thief and a robber! 2 But the one who enters through the gate is the shepherd of the sheep. 3 The gatekeeper opens the gate for him, and the sheep recognize his voice and come to him. He calls his own sheep by name and leads them out. 4 After he has gathered his own flock, he walks ahead of them, and they follow him because they know his voice. 5 They won’t follow a stranger; they will run from him because they don’t know his voice.”

6 Those who heard Jesus use this illustration didn’t understand what he meant, 7 so he explained it to them: “I tell you the truth, I am the gate for the sheep. 8 All who came before me were thieves and robbers. But the true sheep did not listen to them. 9 Yes, I am the gate. Those who come in through me will be saved. They will come and go freely and will find good pastures. 10 The thief’s purpose is to steal and kill and destroy. My purpose is to give them a rich and satisfying life.

11 “I am the good shepherd. The good shepherd sacrifices his life for the sheep. 12 A hired hand will run when he sees a wolf coming. He will abandon the sheep because they don’t belong to him and he isn’t their shepherd. And so the wolf attacks them and scatters the flock. 13 The hired hand runs away because he’s working only for the money and doesn’t really care about the sheep.

14 “I am the good shepherd; I know my own sheep, and they know me, 15 just as my Father knows me and I know the Father. So I sacrifice my life for the sheep. 16 I have other sheep, too, that are not in this sheepfold. I must bring them also. They will listen to my voice, and there will be one flock with one shepherd.

17 “The Father loves me because I sacrifice my life so I may take it back again. 18 No one can take my life from me. I sacrifice it voluntarily. For I have the authority to lay it down when I want to and also to take it up again. For this is what my Father has commanded.”

He is the best shepherd. Human life is so often loveless, disappointing, and below expectations to each of us... so it is so refreshing to see such a demonstration of love, and commitment to us - when our "freedom" has become our ruin!