The Parable of the
Dragnet 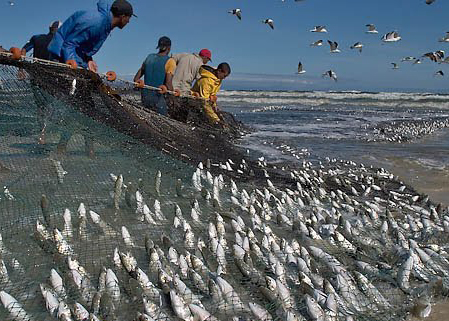 The Parable of the Dragnet:

47 “Again, the Kingdom of Heaven is like a fishing net that was thrown into the water and caught fish of every kind.

48 When the net was full, they dragged it up onto the shore, sat down, and sorted the good fish into crates, but threw the bad ones away.

49 That is the way it will be at the end of the world. The angels will come and separate the wicked people from the righteous,

50 throwing the wicked into the fiery furnace, where there will be weeping and gnashing of teeth.

The Parable of the Dragnet...

Does the Dragnet split remind you of something?

Only the destination for the "wicked"  are described here...

"throwing the wicked into the fiery furnace, where there will be weeping and gnashing of teeth..."

Do you remember Daniel 3?

I will give you one more chance to bow down and worship the statue I have made when you hear the sound of the musical instruments. But if you refuse, you will be thrown immediately into the blazing furnace. And then what god will be able to rescue you from my power?”

Shadrach, Meshach, and Abednego replied, “O Nebuchadnezzar, we do not need to defend ourselves before you. If we are thrown into the blazing furnace, the God whom we serve is able to save us. He will rescue us from your power, Your Majesty.

But even if he doesn’t, we want to make it clear to you, Your Majesty, that we will never serve your gods or worship the gold statue you have set up.”

19 Nebuchadnezzar was so furious with Shadrach, Meshach, and Abednego that his face became distorted with rage. He commanded that the furnace be heated seven times hotter than usual.

Then he ordered some of the strongest men of his army to bind Shadrach, Meshach, and Abednego and throw them into the blazing furnace.  So they tied them up and threw them into the furnace, fully dressed in their pants, turbans, robes, and other garments.

And because the king, in his anger, had demanded such a hot fire in the furnace, the flames killed the soldiers as they threw the three men in. So Shadrach, Meshach, and Abednego, securely tied, fell into the roaring flames.

But suddenly, Nebuchadnezzar jumped up in amazement and exclaimed to his advisers, “Didn’t we tie up three men and throw them into the furnace?”

“Yes, Your Majesty, we certainly did,” they replied.

“Look!” Nebuchadnezzar shouted. “I see four men, unbound, walking around in the fire unharmed! And the fourth looks like a god!”

Then Nebuchadnezzar came as close as he could to the door of the flaming furnace and shouted: “Shadrach, Meshach, and Abednego, servants of the Most High God, come out! Come here!”

So Shadrach, Meshach, and Abednego stepped out of the fire. Then the high officers, officials, governors, and advisers crowded around them and saw that the fire had not touched them. Not a hair on their heads was singed, and their clothing was not scorched. They didn’t even smell of smoke!

Then Nebuchadnezzar said, “Praise to the God of Shadrach, Meshach, and Abednego! He sent his angel to rescue his servants who trusted in him. They defied the king’s command and were willing to die rather than serve or worship any god except their own God.

Therefore, I make this decree: If any people, whatever their race or nation or language, speak a word against the God of Shadrach, Meshach, and Abednego, they will be torn limb from limb, and their houses will be turned into heaps of rubble. There is no other god who can rescue like this!”

The parable of the Dragnet speaks...

The results are dramatic...