The Parable of the
Rich Man and the Beggar 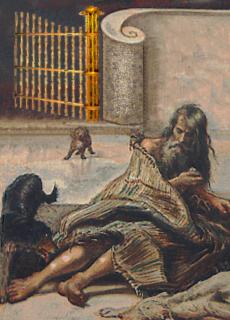 The Parable of the Rich Man and the Beggar:

19 "There was a certain rich man who clothed himself in purple and fine linen and reveled and feasted and made merry in splendor every day.

20 "And at his gate there was [carelessly] dropped down and left a certain utterly destitute man named Lazarus, [reduced to begging alms and] covered with ulcerated sores.

21 "He desired to be satisfied with what fell from the rich man’s table; moreover, the dogs even came and licked his sores.

22 "And it occurred that the man begging died and was carried by the angels to Abraham’s bosom. The rich man also died and was buried.

23 "And in Hades, being in torment, he lifted up his eyes and saw Abraham far away, and Lazarus in his bosom.

24 "And he cried out and said, Father Abraham, have pity and mercy on me and send Lazarus to dip the tip of his finger in water and cool my tongue, for I am in anguish in this flame.

25 "But Abraham said, Child, remember that you in your lifetime fully received [what is due you in] comforts and delights, and Lazarus in like manner the discomforts and distresses; but now he is comforted here and you are in anguish.

26 "And besides all this, between us and you a great chasm has been fixed, in order that those who want to pass from this [place] to you may not be able, and no one may pass from there to us.

27 "And [the man] said, Then, father, I beseech you to send him [resurrected] to my father’s house—

28 For I have five brothers—so that he may give testimony and warn them, lest they too come into this place of torment.

29 But Abraham said, They have Moses and the Prophets; let them hear and listen to them.

30 But he answered, No, father Abraham, but if someone from the dead [like Lazarus] goes to them, they will repent change their minds for the better and heartily amend their ways, with abhorrence of their past sins.

31 He said to him, If they do not hear and listen to Moses and the Prophets, neither will they be persuaded and convinced and believe [even] if someone should rise from the dead.

The Man Who Tried to Pray In Hell, But It Was Too Late...

Lazarus was a "beggar" only on earth...

The Rich Man's sin was not his wealth - Abraham was very rich. The Rich Man's sin was to neglect the needy, the beggar - and NOT use the talents and money that GOD entrusted to him - which includes an inherent responsibility to help the poor when he had an clear, and obvious opportunity to do so...

The Good Samaritan did exactly the opposite to the Rich Man. Compassion must play a realistic role in every individual life. Go down to the homeless shelter, give money or time - make a difference. Find some way to help those with a genuine need. Be aware of scams - avoid them. Give from your heart. GOD watches...

Remember, Jesus Christ gave the ultimate sacrifice at Golgotha - on Calvary's Cross. He died. The just for the unjust. Got the picture, yet?

How Are We Any Different?

How are we any different from the Rich Man in the parable?

The man's outward appearance cannot be interpreted to be the same as his inward relationship with GOD and how GOD sees him...This gentleman may indeed have a fabulous relationship with Jesus Christ, and what we see outwardly may be similar to what happened to Job. Bad things do happen to good people. And those who have "disposable income" - in other words, have more than they need - should seriously reflect on the message of this parable. This life is so short...eternity is a little longer. Give wisely. Give humbly. Seek ways to put your money where it blesses you and the recipient...and give with "no strings attached." You will be blessed!