Ever since the Fall it has been second nature for man to justify himself. But he is not to be trusted in his own judgment.

"All the ways of a man are clean in his own eyes : But Jehovah weighs the spirits"

If man were his own judge, who would be condemned?

GOD's eye therefore sees a mass of corruption; while "all the ways of man are clean in his own eyes"...

"The Lord saw that the wickedness of man was great in the earth, and that every imagination and intention of all human thinking was only evil continually."

"But no, all have turned away;  all have become corrupt.
No one does good, not a single one!"

In fact - man will never believe his own real character until he is forced to see his own face with a convincing light...

"At one time I lived without understanding the law. But when I learned the command not to covet, for instance, the power of sin came to life,

Remember, the woman taken in adultery? 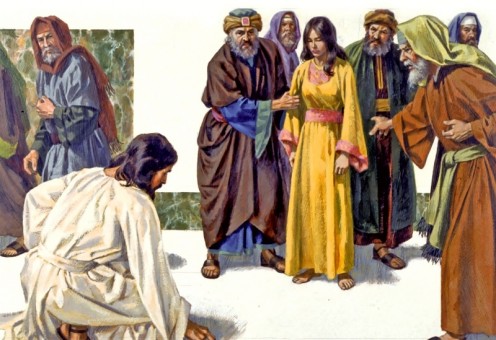 The Pharisees wanted her to be stoned.

And the scribes and Pharisees brought unto him a woman taken in adultery; and when they had set her in the midst,

4 They say unto him, Master, this woman was taken in adultery, in the very act.

5 Now Moses in the law commanded us, that such should be stoned: but what sayest thou?

6 This they said, tempting him, that they might have to accuse him. But Jesus stooped down, and with his finger wrote on the ground, as though he heard them not.

7 So when they continued asking him, he lifted up himself, and said unto them, He that is without sin among you, let him first cast a stone at her.

8 And again he stooped down, and wrote on the ground.

9 And they which heard it, being convicted by their own conscience, went out one by one, beginning at the eldest, even unto the last: and Jesus was left alone, and the woman standing in the midst.

10 When Jesus had lifted up himself, and saw none but the woman, he said unto her, Woman, where are those thine accusers? hath no man condemned thee?

11 She said, No man, Lord. And Jesus said unto her, Neither do I condemn thee: go, and sin no more.

Her actions, they were convinced, made stoning the only choice.

But Jesus judged by principle -

Most believers judge David only by his actions, and that is the only judgment they know...

Yet, GOD saw something going on in the heart of David that could not be neatly locked into an "action" only judgement.

Yes, David had consequences for his sin. There are always "consequences".. because the "wages of sin is death"  - yet the mercy of GOD can be applied to allow opportunity to experience GOD's mercy and grace.

We only see actions, and equate that with judgment

"...And then he added, “It is what comes from inside that defiles you. 21 For from within, out of a person’s heart, come evil thoughts, sexual immorality, theft, murder,

23 All these vile things come from within; they are what defile you.”

We judge each other, blindly, on these "actions" that we observe, or suspect...

But there is another ingredient...

But such were some of you...

As the tree thrown into the waters - healed the well. So, the blood of GOD's great sacrificial lamb - the death of the Lord Jesus Christ - is the one, singular point of mercy and transformation...

GOD looks at the "spiritual heart" of man and bases our future on what He sees on the inside.

"And Solomon, my son, learn to know the God of your ancestors intimately. Worship and serve him with your whole heart and a willing mind. For the Lord sees every heart and knows every plan and thought. If you seek him, you will find him. But if you forsake him, he will reject you forever."

"But my people would not listen to me. They kept doing whatever they wanted, following the stubborn desires of their evil hearts. They went backward instead of forward."

"But I, the Lord, search all hearts and examine secret motives. I give all people their due rewards, according to what their actions deserve.”

"Pilate saw that he wasn’t getting anywhere and that a riot was developing. So he sent for a bowl of water and washed his hands before the crowd, saying, “I am innocent of this man’s blood. The responsibility is yours!”

Our real worth is what we are in the sight of GOD alone!

The only salvation provided is through the finished work of the Son of GOD on Calvary's cross.

Let's be diligent to judge our own sin before GOD...

Confessing before Him and departing from evil is the pathway to life.